The sands of time passed particularly slowly for an African lizard called Zasu who has undergone delicate surgery at our vet practice in Solihull to remove an unusual blockage in its intestines.

The Bosc Monitor lizard, owned by Solihull College, had become unsteady and un-coordinated, was off her food and constipated, prompting staff to alert  608 Vets on Warwick Road, which is just a 5 minute drive away from the college.

At first, our vet, Siobhan feared Zasu might be suffering from neurological issues but a detailed examination uncovered the real cause of her problem – a blockage of sand! 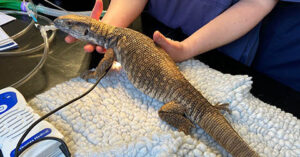 Siobhan explained: “Zasu presented with neurological signs initially. She seemed to be weak on her front legs and was struggling to strike at food.

“We carried out a series of tests, including a barium study and exploratory coeliotomy (a surgery to examine her internal organs), which revealed Zasu was suffering from an intestinal impaction.”

“Following X-rays and a blood test, Zasu had surgery to remove a significant deposit of sand from her large intestine.

“It was quite a challenge, as the impaction was close to the junction of the intestine with the cloaca (outlet into which the intestinal, urinary, and genital tracts open), which made sewing her back up difficult.

“However, surgery proved to be very successful and now Zasu is back at college and doing really well. She’s finally eating and pooing regularly again!

One final surprise for Zasu’s keepers…

“There was one surprise for the College, though, because Zasu was also spayed at the time of surgery – and they thought ‘she’ was a ‘he’!”

Jo Burnard, manager of the College’s animal unit, said: “We’re very grateful to Siobhan and 608 Vets for the way they cared for Zasu.

“They’re just a mile down the road and we schedule regular visits from Siobhan to check our animals, particularly the exotic species, and make sure they’re all doing well.

“It’s quite a check list for them as we have 15 different species of lizard alone, plus a range of snakes, tortoises, skunks and meerkats, as well as more common mammals and livestock for our animal welfare and veterinary nursing courses.

“But the 608 team is brilliant at dealing with any species, even the really exotic ones, which is a huge help.”