Long-established 608 Vets in the West Midlands is celebrating an impressive 90 years of caring for pets and animals across the region.

608 Vets, which has surgeries in Solihull, Bentley Heath and Acocks Green, was founded in September 1932 by newly-qualified vet Sydney Jennings, the son of a Warwickshire farmer.

Times have changed dramatically since Sydney’s days, with major advances in veterinary care and equipment which have all been embraced by 608 Vets, while still retaining its founder’s original concept of keeping patients and their owners at the very heart of its ethos. 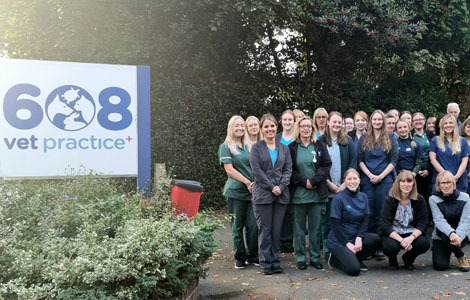 608 Vets lead clinical director Roshni Hothi said: “We are very proud to have served the community here for nine decades and, while many things have changed over the years, our interests are still firmly directed to the care of our community’s pets.

“Much of our work is based on maintaining pets in good health on the basis that prevention is better than cure.

“That could appear as if we are in danger of doing ourselves out of a job but it’s an approach that has been successful for 90 years, so it definitely works!

“Modern times have seen us advance into a hi-tech world with our main Solihull surgery fully equipped to deal with more complicated cases or emergency work 24 hours a day.

“We’ve embraced the digital age, too, which helps make contact and communication with our clients more convenient, although we still use more traditional methods of getting in touch for those clients who prefer it.

Find out more about booking an appointment online >>

“We also value continuity of care and encourage clients to see their favourite vets, whenever possible, and our vets to discuss cases and share their expertise and experience.”

Sydney Jennings would certainly be proud of his legacy. He created the business when he signed a lease for Yew Tree House at 10 Wilson’s Road in Knowle and ran the business until 1945, when he handed over the reins to fellow vet Alan Foster, who had joined the practice five years earlier.

In 1951, Alan moved the business to its current location at 608 Warwick Road, Solihull, with the house number acting as future inspiration for a change of name.

John Heath, who joined in 1950, was responsible for building up the small animal side of the business and bought the practice in 1967, working there until he retired in 2000.

Roshni added: “John was one of the very first veterinary ophthalmologists and his skills produced a significant number of referrals for the practice.

“What’s more, veterinary textbooks belonging to Sydney, Alan and John are still in the practice in our collection of historical books.”

Those records show that 608’s Acocks Green practice was bought in 1965, having been leased from the early 1950s, while Bentley Heath was acquired in 1971.

Records also reveal 608 Vets was one of the first practices in Britain to offer formal training for vet nurses (then called Registered Animal Nursing Auxilliaries) after a qualification was approved in 1961.

Robin first joined 608 in 19895 and retired earlier this year after almost four decades as a vet.

He said at the time: “Being a vet has been such a great career, despite the long hours and some stressful, challenging situations and cases.

“I always enjoyed being involved in the management of the practice. It added variety to my day to deal with other issues such as supporting veterinary colleagues, surgery property improvements, health and safety, ideas for new equipment and nurse training – I was an assessor for many years.”

Graham, who graduated from Cambridge in 1990, joined the practice the same year, stepping down as a partner in 2016 to focus on more clinical work, while Lesley relocated to Herefordshire in 2020.

Deborah, who is still with the practice, initially joined 608 as a kennel maid before carrying out her veterinary training. She became a partner in the practice in 2005.  She is clinical lead at the Bentley Heath practice and oversaw the renovations there six years ago. Deborah has a special interest in rabbits and promotion of their wellbeing and special care needs requirements.

Another key date was when the practice was acquired by Linnaeus in December 2018, with the veterinary group determined to extend 608’s long and illustrious history of serving its community.

Find out more about our practices in the West Midlands here >>